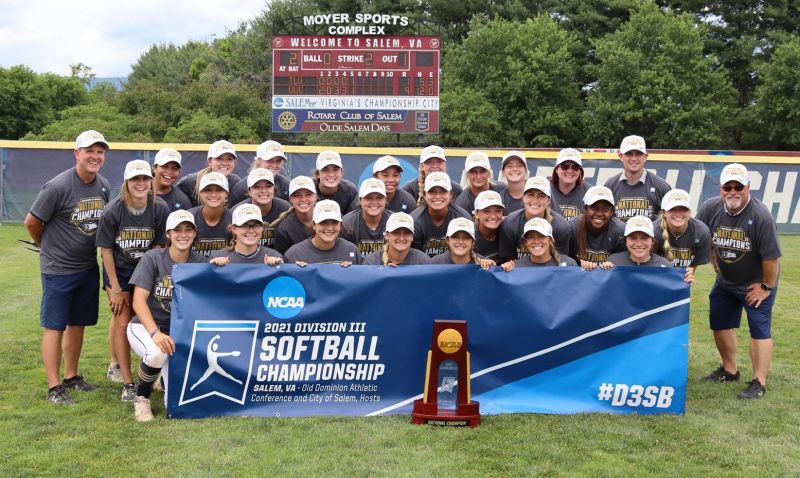 The No. 2 Virginia Wesleyan University Softball Marlins won the 2021 NCAA Division III Championship 9-1 over the No. 4 Texas Lutheran Bulldogs on June 1.

INSIDE THE SCORE
The Marlins scored two runs in the bottom of the first to take a 2-0 lead over the Bulldogs. The first of two runs came on a solo shot over the left field fence by Jessica Goldyn, while Madison Glaubke scored the second on a throwing error by the shortstop.

After a scoreless second inning, the Marlins found a trio of runs in the bottom of the third and fourth innings to go ahead by eight runs heading into the top of the fifth.

Two of VWU's three runs in the third came off the bat of Katelyn Biando who singled up the middle to drive in Goldyn and Julia Sinnett, while Biando came home a few batters later on a single to left from Julie Fassl putting the score at 5-0.

Ariana Rolle scored the first of the three runs in the fourth inning after Sinnett reached on a fielders choice as the Bulldogs tried to get Rolle out at home but the catcher bobbled the ball. The other two runs scored on a Danielle Stewart homer to left center field that scored Goldyn on the play.

TLU broke the eight run lead by VWU scoring a single run in the top of the fifth on a sac fly, but Virginia Wesleyan responded in the bottom of the fifth with a walk off single to right field by Rolle that scored Krissy D'Arco putting the Marlins ahead 9-1 to win the 2021 NCAA Division III Championship.