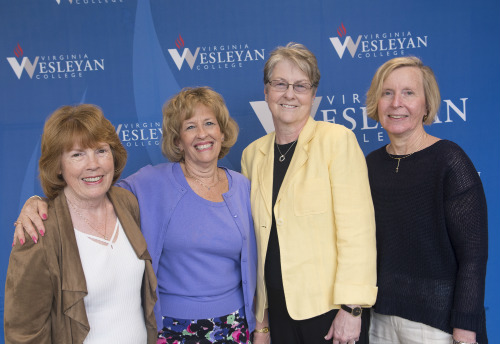 Five longtime faculty members, each with Virginia Wesleyan careers spanning more than two decades, were honored at a retirement reception May 7 in the Pearce Hospitality Suite inside the College’s Jane P. Batten Student Center. Among the retirees were professors Karen Bosch, Ginger Ferris, Lee Jordan-Anders, Tom Lopez, and Sharon Payne.

The traditional commemorative tree planting followed the reception in the Wilson Arboretum, where Tim O'Rourke, Vice President for Academic Affairs and Kenneth R. Perry Dean of the College, commended the retirees for their distinguished service.

“A teacher affects eternity; she can never tell where her influence stops,” O'Rourke said, paraphrasing Henry Adams. “When you come and see these trees that will be here for decades, you begin to appreciate how the lives of our teachers resonate through the ages and multiply through the students they’ve had. That’s a powerful message.”

Additions to the arboretum include a Maidenhair for Karen Bosch; a Pink Dogwood for Ginger Ferris; a Saucer Magnolia for Lee Jordan-Anders; a Southern Magnolia for Tom Lopez; and a Crape Myrtle for Sharon Payne.

Here’s a look back at the lives and accomplishments of the retirees:

Professor of Education and Director of Teacher Education
Karen Bosch describes her 22 years at Virginia Wesleyan as a “great career with many responsibilities, challenges and rewards.” The most memorable of those are serving as the director of Teacher Education; receiving the Samuel Nelson Gray Distinguished Teaching Award in 2006; being named a Batten Professor in 2004; and authoring five education-related books: The First Year Teacher (1994, 2000), Planning Classroom Management for Change (1999), Planning Classroom Management (2006), The First Year Teacher: Planning A Classroom That Works (2010); and The First Year Teacher: Be Prepared For Your Classroom (2015). Also among her most memorable accomplishments are the development of an Old Dominion University agreement that admits VWC students into graduate programs in five areas without the GRE; the initiation of a study abroad program that allowed VWC students to complete their student-teaching placement in Ireland; the contribution of past students’ ideas and strategies for her books; and watching alumni return to serve as cooperating teachers to a new generation of VWC students. Bosch notes a particularly special recognition she received recently—a student gave her a packet of Forget-Me-Not seeds with a note attached that read, “Thank you for planting my seeds of knowledge. I truly appreciate your guidance in my journey.” Now it’s time for Bosch to begin a new journey of her own. In retirement, her goal is to have fun, saying farewell to stress and deadlines. She plans to travel and spend quality time with family. “All work and no play makes for a dull person,” she says. “I’m looking forward to all play and no work and seeing what I become.”

Assistant Professor of Education
Ginger Ferris’s devoted service to Virginia Wesleyan spans 28 years, during which she was an integral member of the College’s education department and its PORTfolio Program. Her areas of expertise include elementary and early childhood education, and parenting and infant education. She has taught courses at several colleges and done consultation and training with the staff and administrators in the Head Start program. Her study of comparative education has involved course work and visits to educational facilities in nearly 30 countries. Throughout her career, Ferris has been involved in a number of community service projects which include serving on the Early Childhood Advisory Board for Tidewater Community College, the Virginia Beach Families for a Lifetime Committee, and facilitating the Pipeline to the Community Project at three Title I schools in Virginia Beach. She has also been a dedicated supporter of the Ceramic Designers Association’s Empty Bowls Charity Dinner, held annually at Virginia Wesleyan.

Professor of Music and Artist-in-Residence
In her 29 years at Virginia Wesleyan, pianist Lee Jordan-Anders has served as professor of music and Artist-in-Residence. She has taught an array of courses that focus on aesthetics, listening, music theory, chamber music, and applied piano. She began VWC's Familiar Faces concert series in 1986; recorded multiple CDs; published articles in Clavier magazine; and worked closely with the Chrysler Museum of Art to create a series of programs entitled, "Picture This!" that pair works of art from their collection with musical selections. Jordan-Anders was appointed music director for the Orchestra of the Eastern Shore in 2009, introducing new work to the orchestra’s repertoire in addition to conducting and rehearsing. She continues to be an active performer and scholar, giving concerts and lectures throughout the United States. Retirement will take Jordan-Anders on new life adventures, but she leaves her legacy at Virginia Wesleyan: “James Baldwin said, ‘The world is before you and you need not take it or leave it as when you came in.’ I’m proud of the contributions I’ve made to the College; I do not leave it as when I came in.”

Professor of Sociology and Criminal Justice
Tom Lopez arrived at Virginia Wesleyan “partly by luck,” he says. In 1989, he happened to be sitting in an administrative office at Tidewater Community College, where he taught at the time, when a call came in from VWC with a request for a part-time psychology professor and sociology professor. Lopez recalls: “The secretary looked at me and said to the person on the phone, ‘I have someone here who can do both!’’ In his 26-year career at VWC, Lopez has guided criminal justice to become one of the largest majors on campus while coordinating a harmonious partnership between the sociology and criminal justice departments. “I have absolutely loved working with my students, learning as much from them as I hope they have learned from me,” he says. “I also could not have asked for a better group of colleagues in my department, a happy little band of fellow travelers.” He has also served as liaison to the Reserve Officers’ Training Course (ROTC) Marlin Detachment. Of his accomplishments, he is most proud of the development and establishment of the criminal justice major and also the Office of Community Service—with Diane Hotaling as its “most capable and dedicated director.” Lopez is proud to call his two daughters Wesleyan graduates and even had the pleasure of seeing his oldest married on campus in Monumental Chapel. He has a passion for photography and an extensive collection of coins and medals. His collecting has spanned over 25 years and he has gained an international reputation as a consultant for major collectors. In retirement, he plans to work on a screenplay based on his book Keeper of the Storm. But for now, if you’re looking for Lopez, you’ll find him at the beach.

Professor of Social Work and Director of the Women's Resource Center
During her 22-year career at Virginia Wesleyan, Sharon Payne has amassed an incredibly long list of accomplishments and accolades. In addition to her teaching career, she has been a practicing psychotherapist, specializing in treating women with affective disorders, families with teens, substance abuse and addictions. She is an elected leader in numerous clinical social work organizations from the local to national level, most notably her appointment as a distinguished practitioner and fellow by the National Academies of Practice. She was a founding member of the Clinical Social Work Guild and serves on numerous local boards and committees to develop and advise community based social service and healthcare programs. Most recently, she was named to the Hampton Roads Mission Advancement Council for Virginia Supportive Housing. Her scholarly interests include women’s issues, death, loss and homelessness, and she has created numerous innovative courses in those areas at VWC, including “Women on the Brink,” a week-long experience where female students live in a homeless shelter and on the streets in Washington D.C., and “Homeless in America,” which immerses students in local homeless encampments in the area. Payne served as the very first director of the College’s Women’s Resource Center and helped develop the Women’s and Gender Studies Program and various women’s student groups on campus. “We have truly gifted feminist scholars and activists on this campus and equality for all persons will continue to be championed by them,” she says. “I am enormously proud of what we have done and know with certainty that these programs will flourish and benefit the entire community.” Payne was named a Batten Professor from 2010-2013, and was instrumental in bringing the Bachelor of Social Work degree to VWC in 2014. Though the list of her achievements is long, there is one role she is particularly proud of: “The most wonderful fruits of my time at Virginia Wesleyan are my memories of and ongoing relationships with our magnificent graduates who are wonderful social workers. To realize that I have made a contribution to educating these professionals is truly awesome to me.” In retirement, Payne will focus on her private psychotherapy practice and current volunteer activities. She also plans perfect the art of saying “no” to the many things that others ask her to do, giving her time to enjoy personal interests like playing her piano, working out, reading for pleasure, and traveling, to name a few.