From Politics in Film to Heroes and Villains

January Term has enabled students to focus on one intensive course 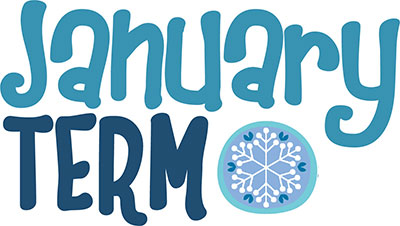 Dr. Schwennicke said that her mind immediately turned to the students in her class.

In an interview on WVEC’s 13 News Now for their segment, Class after chaos at the Capitol, she was asked to share her thoughts.

Her goal in class was to foster a comfortable environment suited to free discussion and expression, even if it oftentimes means keeping herself out of it.

"I'm very aware of the influence I could have on their opinion, not just shaping, but making them feel comfortable speaking up in class.”

During January Term, students typically have opportunities to take unique courses, like “Politics and Film,” not offered during regular semesters. They are able to earn additional credits and accelerate their progress toward degree completion.

January Term 2021, which was scheduled for January 4 - 22, held true to this tradition even though it was offered in a remote format due to the COVID-19 pandemic.

Courses offered this month were varied and many and some used film to build skills in analysis and interpretation of visual media. They included not only “Politics and Film”, which explored political science through topics that include war and peace, democratic governance, and social justice, but also “Heroes and Villains,” which examined film, literature, music, comics, musicals, and television to consider how heroes and villains are constructed, defined, and received by audiences.

Through large group discussions, guided breakout room discussions, group information sharing via cloud-based documents, discussion board posts, and in-class presentations, students explored what a society's heroes and villains have to say about our society and our values.

“One of our biggest goals in this course,” said Dr. Mortensen, “was to challenge students to not consume media and films at face value, but to choose to be deliberate about the films they watch and work to peel away the layers of meaning that are present in every great work of art.”

Dr. Mortensen explained that resources like “Teleparty,” which synchronizes video playback and adds group chat, were also used throughout the course.

He noted that in a face to face version of this course, the instructors would typically have to pause the film for discussion. Using online resources, enabled them to engage in discussion without having to interrupt the film.

“The compressed nature of the January term gives students the chance to focus on one course,” said Dr. Malone. “More often than not, the courses offered in January are unique in approach and subject that are not only engaging but often the highlights of the student experience at VWU.”