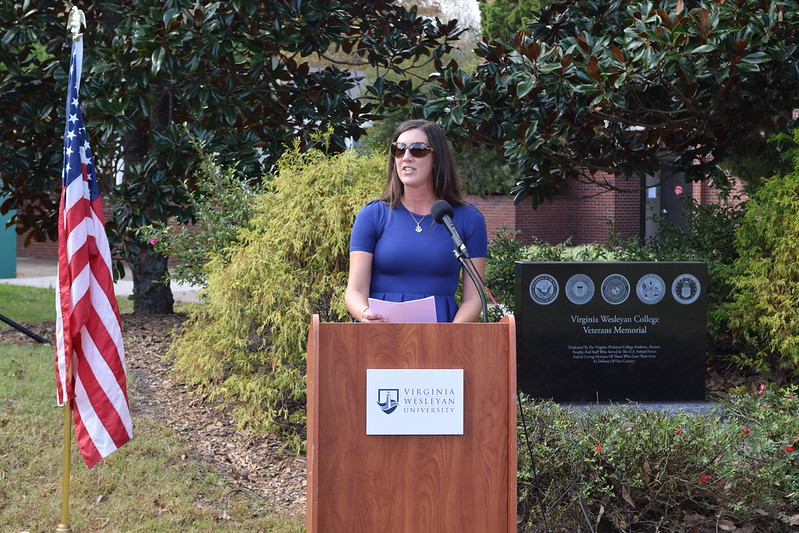 “We at Virginia Wesleyan are exceptionally proud of our Marlin veterans—a vital component of our community made up of current students, faculty, staff, and hundreds of alumni,” said President Scott D. Miller at the University’s annual Veterans Day Ceremony on November 11. “You have gone above and beyond your citizens’ duty by volunteering your lives and answering when your country has called.”

The event, held on Godwin Hall Lawn in front of VWU’s Veterans Memorial Monument and Garden, celebrated Marlin veterans and active-duty service members. The ceremony opened with the entrance of the VWU and ODU Army ROTC Color Guard; a virtual rendition of “The Star-Spangled Banner” by Virginia Wesleyan’s Vox Vera; and an invocation offered by VWU Security Officer and United States Navy Veteran Barbara Artis. Coordinated by Executive Director of The Lighthouse,  Amy Rush, the annual tribute has become a Wesleyan tradition.

Hammer has been an adjunct instructor in the Earth and Environmental Sciences department since 2017. She has a M.S. degree in Soil and Water Science from the University of Florida and works full time as a soil scientist for the U.S. Department of Agriculture Natural Resources Conservation Service.

Hammer, who served in the U.S. Navy from 2002-2006, was an Operations Specialist 2nd Class (SW) on the USS Gettysburg (CG-64) in Mayport, Florida. During her time on the guided missile cruiser, she deployed in support of Operation Iraqi Freedom and Operation Enduring Freedom. She was also involved with joint training operations with allied forces in the North Atlantic Ocean and counter-drug operations in the Caribbean Sea and South Pacific Ocean. Hammer was also a member of the ship’s honor guard.

“I am very proud of my military service,” said Hammer. “It was easy to be filled with patriotism and a call to service when I turned 18 years old on September 12, 2001, the day after the unprecedented and devastating terrorist attacks on our country. But, my service has never felt like it was a sacrifice.”

Hammer told attendees that she was deployed to some dangerous places, but she never really felt like she was in personal danger. She acknowledged that there are men and women who have sacrificed life and limb, sacrificed witnessing the birth of their children and many milestone moments, to protect us and our freedoms.

“But for many, like myself, military service has felt less like a sacrifice and more like a blessing.  There is great value in being a veteran.”

Hammer noted that her time in the military has served as the foundation for her adult life. She said that although it didn’t always feel like it, joining the Navy was absolutely the best decision she made as a teenager.

Hammer grew up in Hartford, Wisconsin, the daughter of factory workers who never had the opportunity to attend college, but she said that they had always planned for her to have that opportunity.

She notes that her path to the Navy began just prior to her sophomore year of high school when she went on a field trip with her DECA group to Gurnee Mills Mall in Gurnee, Illinois. It was there that she was introduced to the Navy’s Recruit Training Command, and first considered leaving the “frozen tundra of rural Wisconsin” and becoming a sailor in the Navy after high school.

“The highlight of most sailors’ service is definitely the travel,” noted Hammer. “My very first port visit in the Navy was to the Bahamas, in January. No frozen tundra in sight!”

She also visited Bahrain and Dubai in the Middle East; Italy and Spain in the Mediterranean; England and Scotland in the United Kingdom; Curacao and Cuba in the Caribbean, and Panama in Central America.

“I toured the ruins of ancient Rome and marveled at the majesty of St. Peters Basilica.  In Scotland, I visited Stirling Castle and was in awe of the natural beauty of the lush, green countryside.  One of my most memorable moments overseas was during a port visit in the United Arab Emirates when a middle eastern couple asked me to hold their baby for a photograph and then thanked me for my service.”

Hammer says she traveled stateside, too.  The USS Gettysburg honor guard had a special relationship with the town of Gettysburg, Pennsylvania, and they were invited to lead their Memorial Day parade on a regular basis. It was there that she met astronaut Neil Armstrong, who had served as a naval aviator in the Korean War.

“As promised by my recruiter, who I am still friends with today, I saw the world.  I went on an incredible journey and broadened my horizons.”

Hammer noted that it wasn’t always fair winds and following seas.  She said that she also faced adversity, and as with most experiences in life, there were ups and downs.

“But, through it all, I gained a global perspective of the world. I worked long, hard hours. I followed orders. I. Grew. Up.”

She credits her experiences in Navy with providing so many benefits in her life, including completing her education.

“Every day I am grateful for the opportunities that I have been given, and I truly believe that if I had not spent four years of my life serving my country, I would not have done as well in college and I would not have two jobs that I love.  I certainly wouldn’t have ended up at Virginia Wesleyan as a student or an instructor, and I would not be here speaking to you today.”

She noted that serving in the military isn’t easy, and it’s certainly not for everyone.

“When your path in the military ends, you are older and hopefully wiser than you were before.  You’re ready for a new chapter, and it’s up to you to put the veteran’s benefits that you earned to use. There is great honor in serving your country and great value in being a veteran.”

Following Hammer’s remarks, Luke Dobrin, of Boy Scout Troop 259 in Chesapeake, Virginia, played “Taps” on the bagpipes in honor of those veterans we have lost.

The ceremony concluded with “Amazing Grace” played on the bagpipes by Dobrin.