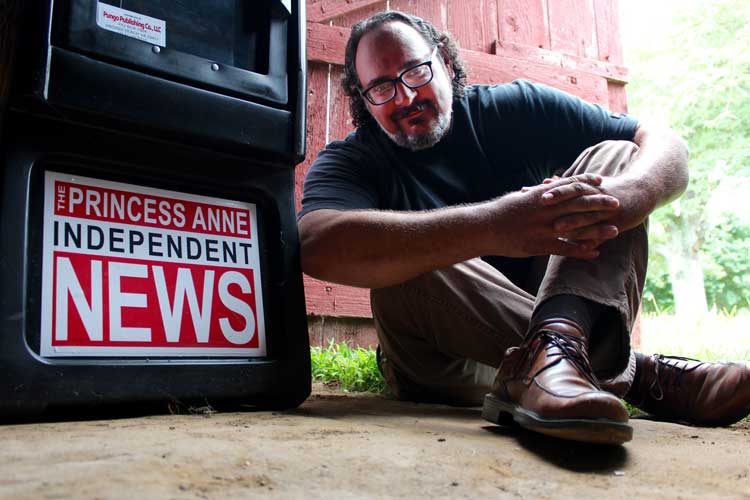 The most emphatic statement John-Henry Doucette, Virginia Wesleyan College Class of 2001, made when talking recently: “I wasn’t the greatest student.”

It’s hard to believe him. Doucette appears to be the epitome of a hard worker. Take, for example, the beginning of 2015: He was teaching students at Virginia Wesleyan; He was teaching students at another college; He was settling into a new home after moving to Virginia Beach from Portsmouth the previous fall; He was parenting his three girls, ages 8, 6 and 18 months. And, oh yeah, he was launching a community newspaper.

Doucette thought about the idea for years. Writing has almost always been part of his life. In high school, he wrote articles for a newspaper in Providence, Rhode Island, his hometown. When he enlisted in the Navy, he spent a year in Indiana and then reported to the U.S.S. Roosevelt. On board, he embraced journalism, first in broadcast and then print.

Norfolk and a woman named Cortney, now his wife, won Doucette’s heart when he left the Navy. He started freelancing—or “stringing,” as he prefers the old-fashioned term—for The Virginian-Pilot and enrolled in Virginia Wesleyan.

“I was a U.S. history major,” he shares, “but took writing classes.”

The best part of school?

“The important professors I had,” says Doucette.

“I really developed an interest in civil rights with Dr. Berry, and went on to do some reporting on it,” he says.

Another influencer was journalism professor Bill Ruehlmann. When Ruehlmann retired in 2011, Doucette honored him on his blog, writing in part: “And how many of the stories written for his classes—rewritten and sometimes re-reported after his notes (always in green, as it is a less punishing color than the dreaded red pen)—were among the first that got me noticed by The Pilot.”

Doucette went on to work as a Virginian-Pilot staffer for eight years.

Ruehlmann, Doucette and fellow VWC graduate Veni Fields ’00 had a reunion in June when the three attended a meeting of the Princess Anne County/Virginia Beach Historical Society (PACVBHS). Virginia Wesleyan archivist and PACVBHS historian Stephen Mansfield coordinated the meeting’s presentation about print media and spoke about the history of the press in the county. Ruehlmann spoke about his experience writing and the evolution of journalism. Doucette talked about his “baby,” Princess Anne Independent News, born in April 2015.

He publishes the paper every two weeks and personally distributes many of the 4,000 copies. Look for the black boxes and racks in southern Virginia Beach—Pungo, Creeds, Landstown, Sandbridge, Red Mill, and the courthouse complex.

“We cover the Princess Anne voting district,” Doucette says. “It’s a really large, diverse area. We have the resort area, suburban and rural. There’s Northwest River, Back Bay and, of course, the ocean.”

Each issue features 16 pages, and the news residents want at a bargain. The paper’s slogan: “Always Local. Always Free.”

Doucette shoots events and activities with a sharp eye for composition. He sells ads at reasonable prices. He designs the pages with bold headlines and generous room for photos. He also writes up to 10 stories an issue.

“I’m a writer, not really a business person,” he says with a laugh.

His goal is to make Princess Anne Independent News sustainable. That doesn’t mean he expects to make a living from the paper. Doucette will rely on teaching for a steady income. The paper for him is about serving people who value newsgathering, the process that includes both asking hard questions of elected officials and reporting little kids’ baseball scores.

His efforts have been appreciated, as shown on the paper’s Facebook page. One fan wrote: “An amazing little newspaper that I was astonished to see was free. Other free publications in our region are overloaded with ads and have stories that aren't always relevant to this area, but not this one. This area finally gets its own identity in print.” Another said: “Well done and sorely needed. There can never be enough scrutiny, enough attention to local news.”

With annual printing costs for the paper running over $20,000, Doucette knows he has a challenge ahead of him to continue delivering community news. Fortunately, he has helping hands: He’s turned to Jeff Maisey, publisher and editor of Veer, a monthly arts newspaper, and Allen Goldstein, a mentor from the Service Corps of Retired Executives program, for advice. Veni Fields ’00 is writing articles for the paper.

Another assistant of sorts watches out for Doucette as well.

“Before each issue, I’ve been pulling two overnighters,” he says. “I’m jamming myself with Dr. Pepper and coffee. The dog’s used to having the house at night. He’s looking at me like ‘What are you doing?! You OK?!’”