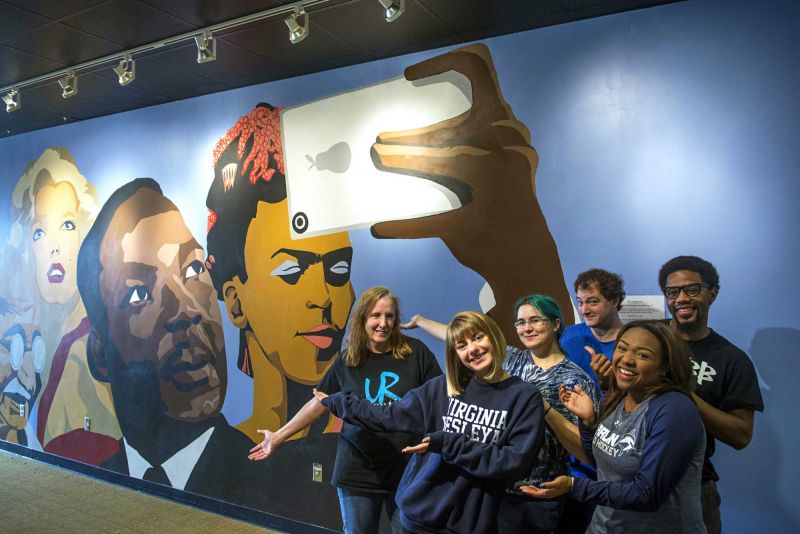 When Caitlyn Hogge ’17, a double major in art and psychology, was brainstorming ideas for a new mural to be installed in the Jane P. Batten Student Center on campus, she knew she wanted something that brought together history and contemporary culture.

She came up with the delightfully anachronistic concept of a group of recognizable historic figures doing something that has become ubiquitous for the millennial generation: taking a selfie.

“Seflie” is the fitting title of the work, which features likenesses of musician Bob Marley, Indian activist Mahatma Gandhi, silver screen icon Marilyn Monroe, Civil Rights leader Martin Luther King Jr., and Mexican artist Frida Kahlo taking an image of themselves with an iPhone-like device on which the well-known apple has been replaced with a pear. Hogge started with seven historic figures and eventually narrowed it down to five.

“I wanted it to be something that represented the idea of the liberal arts and VWC,” Hogge says. “I thought it was important to choose people who were diverse, not only culturally but coming from different careers or disciplines.”

The mural took several weeks to complete and was installed beginning in November on the large wall in the Batten Center Grill area. The idea to place a student-designed mural in that location came from Jason Seward, Dean of Freshmen and Director of the Jane P. Batten Student Center, who worked with Batten Associate Professor of Art John Rudel and students in Rudel’s ART 406 Drawing/Painting Lab course on the project. Students presented proposals based on a prospectus to a committee of students, faculty and administrators.

After Hogge’s “Selfie” design was chosen by the committee, the 2016 Marlin Mural Team was formed including Hogge as lead designer and project manager Hogge and her fellow art students Josh Cherry ’17, Catalina Jones ’19, Mary McLaughlin Seys ’17, Matt Springer ’17 and Jennifer Taylor ’17.  The student team worked diligently to execute the design in the space.

“We modeled the public art process as it might occur in the real world,” says Rudel. “I think the design works on many levels in terms of art and non-art audiences. It has a scale that activates the space, and it’s generally attractive in terms of color. We are very proud of these students.”

The mural will likely stay in place for at least a year, the idea being to repeat the process and either eventually replace the mural with a new design or look for another space on campus to create an additional one. The project represents not only an opportunity for students to put their creative mark on campus but a hands-on learning experience that reflects the business and practical aspects of the art world.