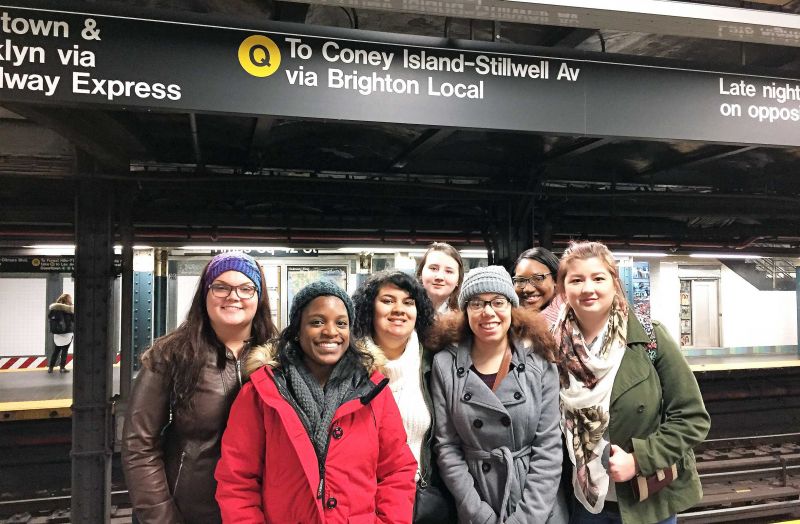 “I took a moment to look around and like a gleaming holy temple, Woorijip was shining luminously with the promise of a good late night meal,” writes  junior communication major Traci Fulcher of the first time she laid eyes on an authentic restaurant in the heart of New York’s Koreatown. It was a unique experience that that she would associate not only with a Virginia Wesleyan study away opportunity but with a personal connection to her Korean-American family.

Fulcher and six other students in English professor Sue Larkin’s English 248 “Travel Writing” course spent nearly a week in New York City in January as part of the College’s Winter Session, a special three-week academic term when students concentrate their studies on one intensive course. Some Winter Session courses allow students to explore off-the-beaten path topics, and many of them involve travel to learning destinations around United States and abroad.

Larkin’s students traveled along with students in theatre professor Travis Malone's “Contemporary New York Theater” course. The two groups were able to collaborate on activities and share perspectives in a way that enriched the overall experience. They even combined efforts to put on a show as a reflection exercise when they returned to campus, and the result, Larkin notes “was a beautiful melding of the two genres.”

“For many of the students, this was their first time in New York City,” Larkin says. “I wanted them to have the chance to not just visit, but to study and immerse themselves in a place. Travel writing is a rapidly growing and wonderfully eclectic genre. This was an opportunity for our students to write outside of academic parameters and learn about what writing for publication means.  It opens up new questions of audience, genre, and form that will bring new depth to their writing.”

The students’ writing went through an intensive collaborative editing process with the understanding that their work would be published on the College’s website. Topics ranged from a trip to Koreatown to the anxiety of a first New York City subway ride to the gap between perception and reality on a tour of NBC Studios. You can read each of the student stories as well as one by Professor Larkin below.

Is That New York I Smell?
From the underground to an unexpected destination, the subway was anything but what I expected
By Gabrielle Brown

Kimchi State of Mind
How I found food, family and belonging in the heart of Koreatown
By Traci Fulcher

“Almost Magical” TV Wonderland
For this die-hard fan, a tour of NBC Studios could never quite live up to the imagination
By Cynthia Griffin

The Hamilton Ravioli with Ragu Line
You could wait a lifetime for New York’s most elusive ticket, so you might as well sit back and enjoy the show
By Susan Larkin

Speaking of Streets...
Navigating New York means knowing when to walk away from the talkers
By Victoria Sierra