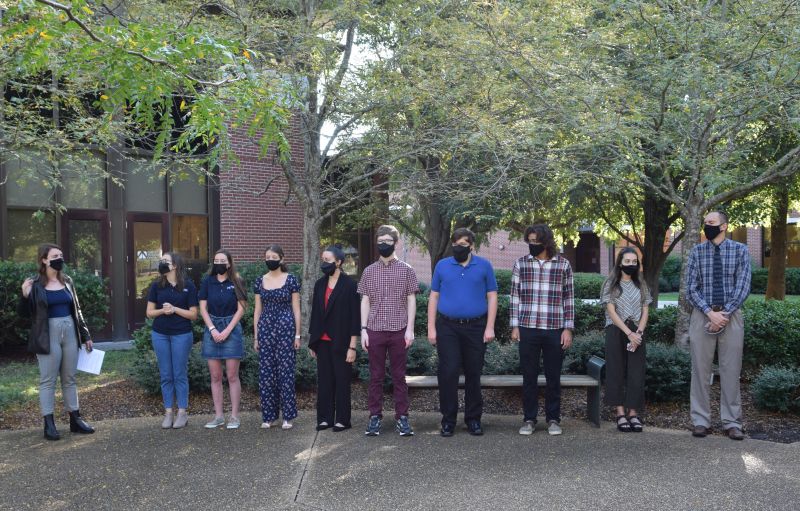 On this 20th anniversary of 9/11, the Virginia Wesleyan community gathered in the Peace Garden in front of the Robert Nusbaum Center on campus at 9 a.m. to remember and reflect on one of the darkest days in our country’s history.

“It's hard to fathom that teens now entering college — or serving in the armed forces — were not yet born on that unforgettable Tuesday morning on September 11, 2001,” said Kelly Jackson, Associate Director of the Robert Nusbaum Center, in opening remarks during the ceremony. “Nearly 3,000 people died in Manhattan, at the Pentagon and in a Pennsylvania field on September 11, 2001, in what remains the deadliest act of terrorism in history.”

Students Joey Mueller, Anitra Howard, Henry Handley, Connor Merk, and Faith Osuji, along with Rev. Bertrand Griffin and Jason Seward, Associate Vice President for Campus Life and Operational Management, shared the voices of people who were at Ground Zero on that day 20 years ago.

Dr. Craig Wansink, Director of the Robert Nusbaum Center and Professor of Religious Studies, shared reflections on looking back and looking forward.

“September 11, 2001, was one of the darkest days in our country’s history, yet in the immediate aftermath of the terrorist attacks, Americans from all walks of life came together in mourning,” said Dr.  Wansink. "People from across the nation – and throughout the world - united in a spirit of kindness, compassion, and support for those impacted by the tragedy.”

Tomorrow, on the actual 20th anniversary of 9-11, Virginia Wesleyan’s Student Government Association (SGA) is challenging Marlins to climb the equivalent of the 2,226 stairs in One World Trade Center tower. That’s 85 ascents of the stairs at the Jane P. Batten Student Center Hub. For each flight climbed, VWU’s SGA will donate $9.11 to the 9/11 Memorial Museum until they reach their goal for a total donation of $775.