The University held a ribbon-cutting ceremony August 24, and fittingly, cut the ribbon with a beam of concentrated sunlight 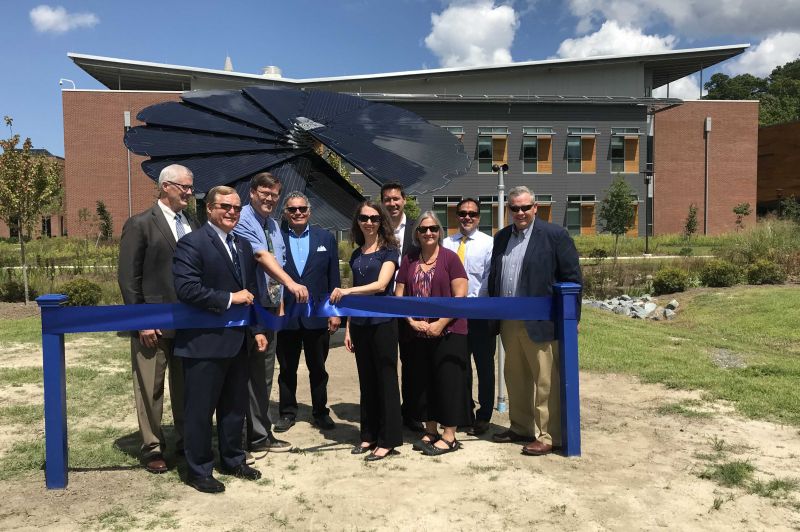 Virginia Wesleyan University is now home to a new type of flower—a solar SmartFlower—and it is only the second college campus in the country to have one. The University held a ribbon-cutting ceremony on August 24 for its new photovoltaic system, and fittingly, the ribbon was cut by a beam of concentrated sunlight focused by a Fresnel lens.

The Fresnel lens collected incident solar light from an area the size of a piece of paper, about 100 inches square.

“The beam of focused light from the lens was about half an inch square enabling the bright, hot, point of sunlight to cut through the ribbon in seconds," explained Assistant Professor of Physics and Earth and Environmental Sciences Katrina Henry. "The SmartFlower has a collecting area of approximately 200-times the lens, making the solar ribbon-slicing a powerful demonstration of the amount of solar energy available for collection by solar panels such as the SmartFlower.”

Many guests were on hand for the event, including area environmentalists from the Chesapeake Bay Foundation, Norfolk Botanical Garden, and Lynnhaven River NOW, as well as national representatives from SmartFlower North America, Collegiate Solar Energy, and Mountain View Solar. Virginia Wesleyan students, faculty, staff and friends were also in attendance.

"Our SmartFlower will serve as a symbol for the University’s commitment to the environment while demonstrating our role as a leader in bringing the latest in solar technology to the region," said VWU President Scott D. Miller. "Virginia Wesleyan students will benefit directly from the power this instrument provides and will be able to learn in real time how it operates and track its power production rates." 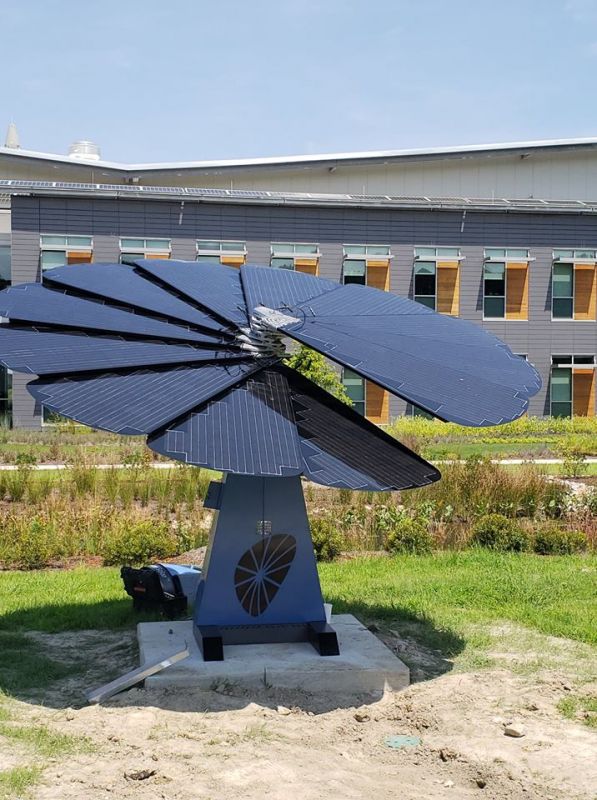 Every morning at sunrise, the SmartFlower will automatically unfold itself. The dual-axis system allows the modular fan to follow the sun across the sky throughout the day, always maintaining the optimal angle. This system generates 40 percent more energy than a traditional fixed solar panel.

The SmartFlower was brought to life at Virginia Wesleyan through the Council of Independent Colleges in Virginia. It will supply power to the Honors Village on campus, which houses Batten Fellows and Shumadine Scholars from Virginia Wesleyan’s highly selective Batten Honors College.

Virginia Wesleyan has received much local, regional, and national recognition in recent years for its sustainability practices. The University received the Chesapeake Bay Foundation's 2018 Conservationist of the Year award, honoring the Greer Environmental Sciences Center, which opened in 2017. As part of its continued commitment and high standards for environmental stewardship, it is fitting that Virginia Wesleyan is one of the first universities in the nation to install this revolutionary solar system. The SmartFlower is located behind the Greer Environmental Sciences Center.

The SmartFlower has earned several international awards, including the Green Good Design Award and Red Dot Award. It has also been recognized in the media through features on Tech Insider, NBC News, “Martha Stewart Living,” and elsewhere. Florida State University will be the third college in the country to install a SmartFlower.