State of the University: Record Fundraising and Endowment Growth 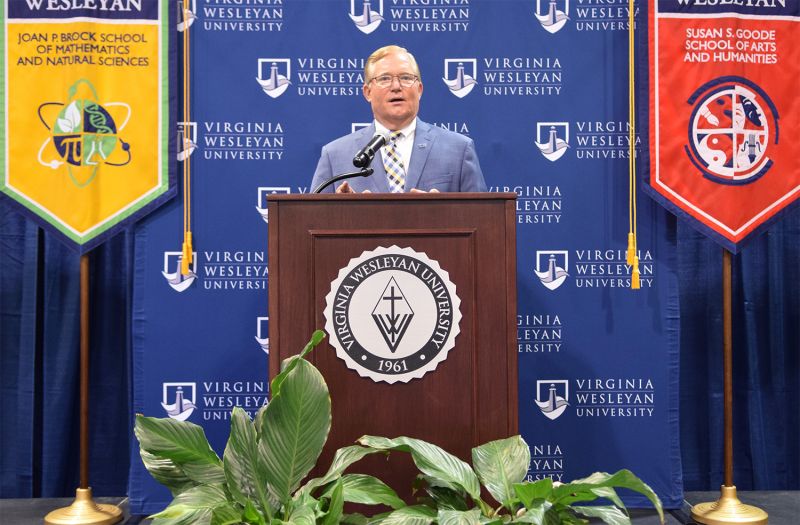 Photo Gallery: State of the University 2021

While national media reports are painting a challenging picture for American higher education, Virginia Wesleyan University President Scott D. Miller described ways the private Virginia Beach institution has continued to grow and prosper during his annual State of the University address on Friday.

In his address, Dr. Miller highlighted accessibility and affordability for students, record fundraising, and growth in physical assets and endowment.

“Despite all the financial challenges facing our students and the University over the last 18 months, our donors have remained true and provided record levels of support,” Dr. Miller told guests during the event in the University’s TowneBank Arena. “In fact, fundraising from public and private sources has been the best in University history.”

President Miller shared that during the last six years the University has attracted $167 million of private donations, and over $10 million in state and federal designated award dollars. This support has resulted in construction of new buildings, renovation of existing structures, new instrumentation and technology, and a larger endowment. The increase in endowment has significantly expanded the University’s scholarship offerings, he noted.

“It has enabled us to revise our position in the marketplace and be more responsive,” said Dr. Miller. “It has led to increased opportunities for our students. This support has truly transformed us from an aspiring local college to an inspiring global university.”

Virginia Wesleyan had an overall headcount of 1,608 undergraduate and graduate students in 2020-21, plus an additional 1,203 continuing education learners and approximately 300 learners at the University’s collaborative campus in Japan. The highly selective Batten Honors College, founded in 2017, also reached its desired capacity of 160 scholars in 2021.

Dr. Miller noted that VWU’s endowment grew to $123 million in the 2021-22 academic year, including an $80.2 million endowment for the Batten Honors College. In keeping with the most significant of the three pillars for the Batten Honors College, the BHC funds are invested in an environmentally friendly way, including the adoption of long-term investment strategies that create an equitable, low-carbon, and regenerative economy.

Dr. Miller also set goals for the future and highlighted the University’s recent accomplishments. Among them:

Watch the 2021 State of the University address in its entirety on the VWU Digital Broadcasting Network.