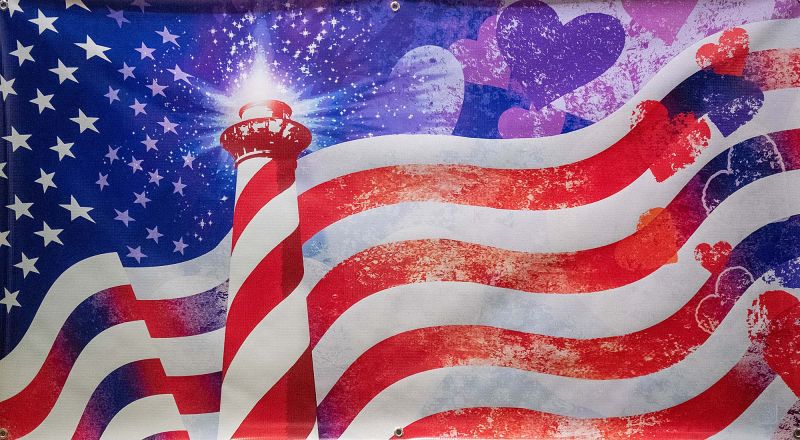 The Unity Flag Project, a nationwide traveling exhibit inspiring empathy and bipartisanship, will make a stop at Virginia Wesleyan University this winter. Hosted by the Robert Nusbaum Center and Neil Britton Art Gallery, the physical exhibition will be open to VWU students, faculty and staff, while a complementing virtual exhibit will be available to the off-campus community. As an expression of national unity, the exhibit will open on Inauguration Day, January 20, and continue through March 19.

The Unity Flag Project was initiated in anticipation of the final presidential debate on October 22, 2020, at Belmont University in Nashville. The idea was launched by Dr. Meaghan Brady Nelson, Assistant Professor of Art Education and Program Director of Fine Arts at Belmont, who took the blue and red polarization of our current political climate and used the visual arts to bring them together to foster “purple empathy.” The project was designed to encourage civil discourse, build empathy, and bridge political divides through the visual arts by inviting artists from across the country to create representations of the U.S. flag that expressed empathy for bipartisanship.

The Robert Nusbaum Center was selected to create the Unity Flag for Virginia. “A Beacon of Hope” was one of the 30 state flags displayed during the October debate and features a lighthouse and heart images as symbols of welcome and hope.

“Lighthouses have traditionally served as guides for ships navigating in turbulent seas,” noted Dr. Craig Wansink, Director of the Robert Nusbaum Center and Professor of Religious Studies at VWU. “They have also become symbols of hope, illuminating darkness and serving as a signpost for the values and virtues that distinguish America as a beacon of light and a safe harbor for people around the world.”

Created under the artistic direction of VWU Branding and Design Manager Christine Hall, in collaboration with Dr. Wansink and Kelly Jackson, Associate Director of the Robert Nusbaum Center, the commonwealth's flag serves as a reminder to remain vigilant in uniting around a vision for a more perfect union, a union in which equality and justice for all rings true.

The Neil Britton Art Gallery exhibit will display 40 flags (32” x 60”) created by artists from across the United States. An additional 12 flags created by local individuals and groups will be added to the on-campus exhibition, and digital designs will be added virtually. Students and community members will be invited to reflect on the notion of “purple empathy” and create new Unity Flag designs to be added.

“We believe that civil discourse in the arts has the power to provide a focal point for dialogue, to reduce barriers to participation and spark individuals into action, to promote new ways of thinking about and understanding issues, and to ultimately catalyze needed change,” stated John Rudel, Curator of Exhibitions for the Neil Britton Art Gallery. “Following a period of tremendous social unrest in our country, we are hopeful that promoting unity through this exhibition and related events will harness the power of creative expression as a means for positive growth.”

Individuals or groups are invited to submit digital images of their own Unity Flag designs to be included in the virtual exhibition. Interested parties should email .jpg or .pdf files to jrudel@vwu.edu by March 14. “Unity Flag Design” should be included in the email subject line.

Visit the Unity Flag Project for more information about the original display.