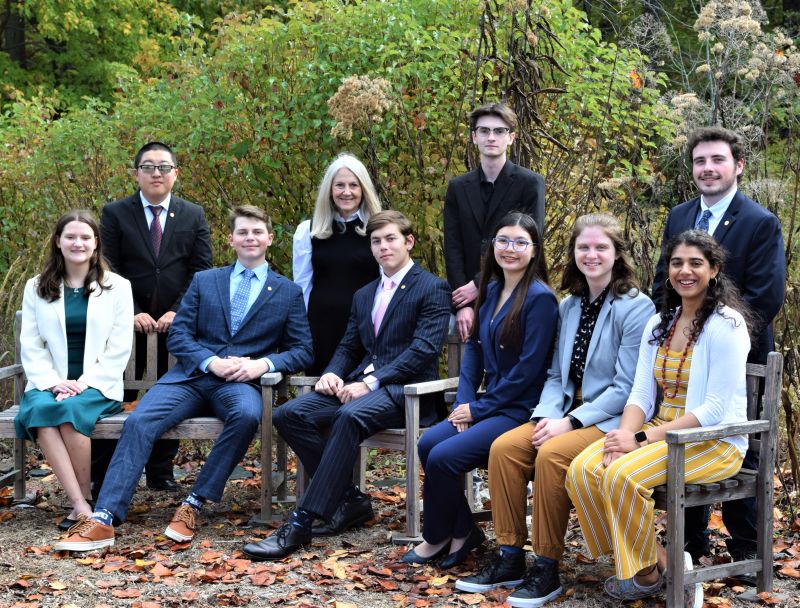 Virginia Wesleyan University’s 2023 Ethics Bowl Team will compete in the 23rd annual statewide collegiate Ethics Bowl sponsored by the Virginia Foundation for Independent Colleges (VFIC) on January 29-30. The event will be hosted on Virginia Wesleyan’s campus for the fourth time in the program’s history. VWU served as the host site in 2005, 2011, and 2017. As is customary, a fundraising dinner is scheduled for the first day of the event, January 29. The 2023 Ethics Bowl Dinner will honor VWU Trustee Emeriti and VFIC Trustee George Y. Birdsong.

VWU’s team has been preparing to compete head-to-head against 16 other highly qualified student teams from Virginia’s leading independent colleges and universities, deliberating a variety of case studies relating to this year’s Ethics Bowl event topic, “Ethics and Digital Media.”

Bennett (team captain), Palmisano, Steiner and Trehan will participate in the competition with Villacrusis as the alternate. VWU team members who are not competing will assist during the event. Eight of the students will participate in a VWU event hosted by The Robert Nusbaum Center on Thursday, January 26, at 7 p.m. in the Lighthouse: Center for Exploration and Discovery in Clarke Hall. This on-campus debate demonstration is designed to provide practice for the students in preparation for the statewide competition. It is attended by members of the campus community who will have the opportunity to interact, critique and discuss deliberations with the team prior to the event.

The faculty coordinator for the team is Professor of Communication Dr. Kathy Merlock Jackson, who first began advising students for Ethics Bowl deliberations in 2012.

“We have a polished, professional team this year,” said Merlock-Jackson. “The students, all members of the Batten Honors College, met weekly during the Fall 2022 Semester to prepare for this important event. They researched, wrote, and argued cases and completed other writing assignments. Attorney Hank Howell volunteered his time to participate in these meetings, providing valuable advice to our team.”

During the event, distinguished professionals serve as judges and moderators. Many notable individuals from a variety of career fields including business, law, education, finance, journalism and others will listen to team presentations and offer reactions. The first rounds of the Ethics Bowl are typically scheduled during Sunday afternoon. On Monday, January 30, rounds three and four begin in the morning, with the final round of competition taking place just before noon. The winning team will be announced early on Monday afternoon.

Virginia Wesleyan University's 2020 Ethics Bowl team, comprised of Alex Powers ‘21, Anitra Howard ‘22, and Criofan Shaw ‘23, took home the Batten Trophy when they won the Ethics Bowl. Deliberating the topic, “Ethics and Higher Education,” the 2020 team edged out Hampden-Sydney College in the final round to win the Batten Trophy for the second time in the event’s history.

The VFIC Ethics Bowl program was first conceptualized in 1997 by the VFIC Ethics Task Force, co-chaired by prominent journalist and former VFIC Trustee Roger Mudd, and Phillip Stone, former president of Bridgewater and Sweet Briar Colleges. The mission of the task force was to explore opportunities to involve students at the 16 VFIC colleges in the lively debate and consideration of applied ethics—real world dilemmas that affect people's lives in increasingly complex ways.