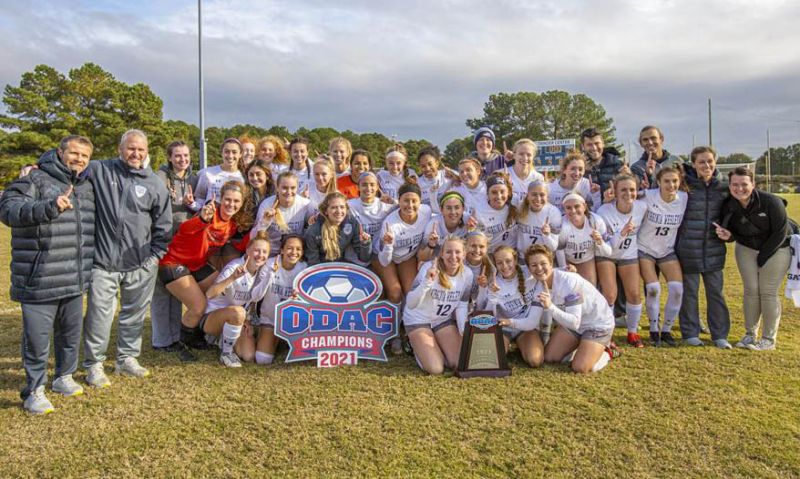 The Virginia Wesleyan University Women's Soccer Team (13-5-2) defeated the Hornets from the University of Lynchburg (15-5) 1-0 to win the 2021 Old Dominion Athletic Conference Championship Title on November 7.

The Marlins captured their second Conference Title in program history, the first one won in 2006, with the win. Sophomore Olivia Bryant scored the game winning goal off a pass from junior Abby Peterson in the 73rd minute to clinch the victory.

Inside the Game
The two teams battled in the first half fighting each other and the wind to attempt to find the back of the net, however, neither team was successful as the score sat tied 0-0 at the halftime horn. The Marlins did control the ball more as they took eight shots in the half while only allowing the Hornets to get off two shots.

As action resumed in the second half, both teams played with more urgency needing to find the back of the net. After 25 minutes of back and forth between UL and VWU, the Marlins managed to put together a play that gave the No. 1 seed a 1-0 advantage over the No. 3 Hornets. Junior Abby Peterson passed the in from the right side of the box to the center where sophomore Olivia Bryant was to score the game winning goal in the 73rd minute. Following the goal Virginia Wesleyan sat back and played heavy defense doing everything they could to keep Lynchburg out of the net and at the end of 90 minutes, the Virginia Wesleyan Marlins emerged victorious winning their second Old Dominion Athletic Conference title in program history and first since 2006.

VWU women's soccer will travel to Ewing, NJ on Saturday, November 13, to face Messiah University in the opening round of the 2021 NCAA National Championship Tournament. Watch live at 1:30 p.m.: bit.ly/3koYPKm

This article was originally published at vwuathletics.com.