We are Virginia Wesleyan 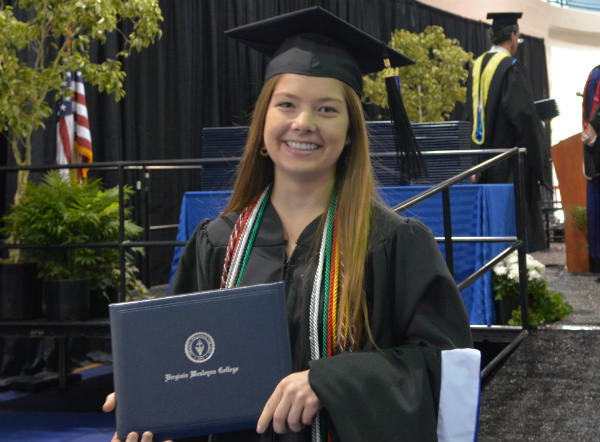 “It is my hope and prayer that you have found deep meaning, deep purpose and value during your days here,” Virginia Wesleyan College President Billy Greer told the nearly 230 members of the Class of 2014 during the College’s 45th Commencement Ceremony on Saturday, May 17.

During the ceremony, President Greer acknowledged the graduates who are veterans of the Armed Forces and directed guests to the commissioning ceremony of Autumn Watson to Second Lieutenant in the United States Army. This event took place at Boyd Dining Center Plaza following Commencement.

Serving as this year’s keynote speaker was 1983 Virginia Wesleyan graduate Joseph P. Ruddy, chief operating officer for the Port of Virginia. He was introduced by fellow alumnus Gary D. Bonnewell ’79, chairman of the College’s Board of Trustees.

“I stand before you,” Ruddy began. “And while there have been events in my life that will certainly rival today, I have never been prouder to have such a responsibility bestowed upon me, to have the honor to be with you and speak with you.”

He spoke of the Class of 2014’s uniqueness and dubbed the millennial graduates “Generation WHY,” remarking on their thirst for answers, reasons and logic. He relayed three attributes that he considers critical to their future success: respect, servant leadership and the power of “We.”

"At the end of the day, all of us here, we are Virginia Wesleyan,” he said. “The greatness of ‘We’ cannot be lost on this wonderful generation. It has such power and force. To ignore this is to do yourself and those around you injustice. Learn to overtly use the term ‘We.’ Be conscious of it and you will watch its effect unfold in front of you.”

Ruddy is an alumnus of VWC’s Recreation/Leisure Services and Physical Education program and a member of the President’s Advisory Council. While a student at the College, he played on the College’s NCAA Division III soccer team. As COO for the Port of Virginia, he is responsible for Terminal Operations, Engineering and Maintenance, and Information Technology. Preceding this role, he served as the Director of Operations and Labor at Virginia International Terminals and held managerial positions at Virginia Intermodal Management, as well as for several ship lines including CMA-CGM, NSCSA and Atlantic Technical Services. He currently serves as Immediate Past Chairman for the Hampton Roads Shipping Association.

"As you embark on your next journey,” he said. “Be bold, be aggressive, call on your education. But above all, be humble, as it will serve you well. But more importantly, it will better serve those you ultimately lead."

The ceremony closed with the singing of the College’s alma mater and a Virginia Wesleyan Chorale performance of “Prayer for Peace,” an original composition written by Director of Choral Music Michael John Trotta. Following the ceremony, graduates and their families gathered outside on the Batten Center lawn.

“I am excited for new adventures,” Dozier concluded. “But will always remember and be grateful for my roots at Wesleyan.”