Callaway’s Pathway to Research at VWU and Beyond 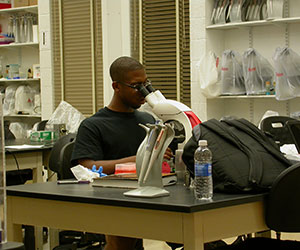 Since his first year at Virginia Wesleyan University, mathematics major LeMar Callaway III ‘18 has participated in a number of research projects, collaborating with faculty in Virginia Wesleyan’s Joan P. Brock School of Mathematics and Sciences and at other institutions.

During the summer after his first year, Callaway worked with Prof. Eric Johnson on a plant molecular biology project that was funded by the American Society for Plant Biology. “What I found most surprising was that research was accessible to me as a rising sophomore,” Callaway recalls.

As Callaway embarked upon this research, he did have some doubts about his ability to conduct research so early in his college career. “I was worried that I wouldn’t know what I was doing and that it would be hard for me to do the research well. While the research was kind of hard, Dr. Johnson was very helpful and supportive,” Callaway explains. And there were some hectic experiences that came with the research. “One of my favorite stories was when I set a beaker of ethanol on fire. Thankfully, it was a contained fire, and with Dr. Johnson’s help, we put it out really quickly.” This research culminated in Callaway receiving a Summer Undergraduate Research Fellowships (SURF) award from the American Society of Plant Biologists in 2015.

Callaway’s research at Virginia Wesleyan University served as a critical springboard for other research opportunities. In summer 2016, he worked with Prof. Dorothea Tholl at Virginia Tech on a plant molecular biology project. In summer 2017, he conducted research at Arizona State University at its Mathematical and Theoretical Biology Institute(MTBI), working with other students on a mathematical-computational model of bacteria biofilm growth.

One of the foremost lessons that Callaway has taken away from his research experiences is accepting the uncertainty of research. As he elucidated, “I learned that not knowing is a part of the process, especially when you do research for the first time. A lot of times, you don’t know what you’re doing. It’s helpful to have a mentor who’s supportive and willing to let you make mistakes, so you can learn and be better the next time around.”

In fall 2018, Callaway’s journey will take him the the University of Michigan where he will pursue graduate studies in mathematics.