Experiencing China: Lessons Beyond the Classroom 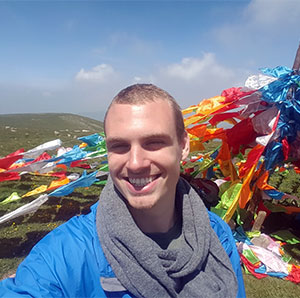 One of the defining experiences of my Virginia Wesleyan career is the study away opportunities that I have had and will have. In the 18 years prior to my collegiate experience, I had never been outside the United States. In my four years as a Virginia Wesleyan student, I will travel three times internationally: to Italy for a Model UN conference, to China as part of a Virginia Wesleyan research team, and to France for semester study abroad.

This past summer, I spent three weeks in China conducting research on two World Heritage sites and Chinese preservation techniques. Before departing, I had believed that as communists, the Chinese people think differently than I and that there were a host of differences that would keep us apart. However, this was not my experience. In China, the Virginia Wesleyan team interacted with a variety of Chinese people, including pilgrims, monks, students, and government officials. Everyone was so welcoming to us that I found it hard to believe that any differences between us were insurmountable. I was asked about a wide array of issues, such as US missiles defense systems in South Korea, Hollywood, Donald Trump, the South China Sea, and New York City. Some of the conversations revealed varying opinions, but most were simply pleasant conversations between peoples from different cultures. For us, the Chinese became real people, a far cry from the dehumanized “other” that is sometimes perpetuated in US popular and political culture. I learned that whatever disagreements we may have, differences can be overcome. This is a powerful lesson for a student pursuing a career in international relations, and it was only through the amazing opportunities that Virginia Wesleyan has provided me that I learned it.