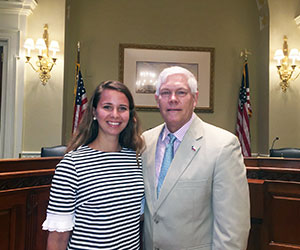 “I always knew I wanted to work in the world of politics, but after working on the Hill, I knew that this is where I belonged,” explained political science major Amanda Gerni ‘19. Gerni interned with Texas Congressman Pete Sessions on Capitol Hill in summer 2017 as part of her political science major. For Gerni, landing a Capitol Hill internship and diving into the world of politics were lifelong goals.

The internship was filled with diverse opportunities that gave Gerni an array of professional experiences. As she expressed, “I was so excited to go into the office everyday because you never knew what event would pop up or what committee was going on that day. Everyday was unpredictable.”

Working on Capitol Hill taught Gerni a number of critical lessons. “The legislative process is complicated, but I got a better understanding of the process by working in the office and being involved,” Gerni explained. She also learned about cultivating professional relationships. “I had always heard that networking and making connections are important. But I quickly learned how important networking really was by being on the Hill.”

Gerni especially values the ways that her internship opened up both professional and personal doors. “One of my most memorable moments was when Congressman Sessions asked me to play basketball with him in the House gym,” she recalled. “I also got to stand next to him while he was giving an interview to Fox News.”

For Gerni, one of the most important outcomes of the internship was confirming that she wants to pursue a career in politics. “Being in the field where you can make a difference. That’s all I want to do -- is make a difference.”

When asked how she landed this internship, Gerni responded that the initial offer was made while she was waiting tables at the Aberdeen Barn. As she recounted, she waited on one of Sessions’ staff members. “We were talking about my major. He said he was impressed with me and he offered the internship to me.” This just goes to show that opportunities are knocking everywhere.