The Perspective of Experience: A Semester Abroad in Morocco and the Netherlands 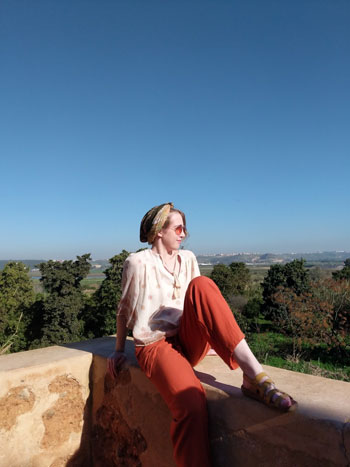 Brianna Sandy ‘21, a Political Science major, studied abroad in Morocco and the Netherlands for the spring 2020 semester. As a Global Scholar and Gilman Scholarship recipient, she found that participating in a semester abroad helped to focus her graduate school plans. She reflected on her experience and shared important moments from her semester during the Being a Woman Abroad workshop, hosted by the Study Away Program.

“The topic of my study abroad was migration and transnational identity; in September, I will be going abroad to graduate school for security and strategic studies. My focus will be on shifting global boundaries--both tangible and virtual. I also got the opportunity to learn some Arabic, which I will continue studying in graduate school and will prove useful in a future career in international security.”

Brianna has an encouraging message for you: “Do it. If you do a little bit of sniffing around for scholarships, there’s plenty to fund undergraduate travel, so you might even be lucky enough not to pay anything out of pocket for your study abroad experience versus staying here. I highly recommend anyone who’s considering study abroad do so, even if it’s not ‘conventional’ for your major.”

An Interview with Brianna Sandy

What did you do to prepare for the experience?
To prepare for my study abroad, I did extensive research on the history and culture of Morocco, which was my program base. I focused more on preparing for Morocco because I felt that the Netherlands would be similar enough to the U.S. that I wouldn’t need much preparation. I learned about the etiquette practiced in Morocco (never shake hands with your left hand!) and the gender dynamics I would need to adjust to.

What were the most important takeaways from your experience?
Studying in Morocco taught me a lot about the complicated nature of power in the real world. It’s easy to read some articles and do some research and decide that you understand the thrust of how power works in a particular place, either on a scale as small as gender dynamics or a scale as large as gender relations. But there are a million details that change the calculus and make parsing out where those lines are a lot more difficult when you’re staring them in the face instead of just reading information that’s been filtered through someone else. A lot of my major is researching other countries and comparing different cultures and policies and outcomes, but my study abroad experience really underlined how difficult it is to see the full picture--no matter how much research you’ve done--without the added perspective of experience.

What is one of your most memorable moments?
The most memorable moment of my study abroad experience for me was when we visited with a local direct aid group in Tetouan. Manos Solidarias makes sure that undocumented migrants attempting to cross the border from Morocco to Ceuta had food, water, and medical care where they hide in the wilderness waiting for an opportunity. When we visited the organization, we got to speak to several people who had attempted the journey before. Two were young men my age, and one of them described having been beaten so badly by Spanish border patrol the last time he had tried to cross that his skull had been cracked and he’d lost several teeth. It had been his sixth time attempting the crossing, and when we asked, he said that he intended to keep trying until he succeeded or was killed because the situation was so hostile for him in his home country and in Morocco. This interaction really broke my heart, because he was very smart and should’ve been in university getting the opportunity to study like us instead of feeling like he had to risk his life getting to Europe. Had I stayed my full term in Morocco, I had arranged to do an internship with Manos Solidarias, and while I enjoyed the research I ultimately had to shift to, I am still disappointed I didn’t get the chance to actually do that internship. Most of the NGOs we interacted with on my trip were trying to integrate transit migrants into Moroccan culture and tried to tell them what to do; I think it was cool that despite the leaders of Manos Solidarias not necessarily agreeing with what their clients were doing, that they respected their right to try and make their future they way that they wanted to.

What did you learn about the culture or norms of the country?
One thing that was a big difference from here in the US was the importance placed on familial and platonic relationships. In Morocco, families have their meals together off the same large plate--even for lunch, many jobs let their employees go home to eat with their families. Moroccans put 110% into their relationships with others, and invest a lot of time in cultivating them; I remember my host mom stopping every ten steps or so to talk to another person that she knew in the market, catching up on how their lives were going. Not just in the American, “How are you doing?” and “I’m fine, how are you?” sort of scripted way, but having deeper and genuine conversations. I was always surprised by the way that people would drop by dinnertime unannounced and be welcomed to a seat at the table with no hesitation and absolute joy by my host mom. Here, that would be considered incredibly rude, but in Morocco, it’s just part of life. And that made Morocco feel much more like a community than anything I’ve experienced here in the U.S. When I came back, I started trying to set aside more time to spend with my family and friends and to be a bit more spontaneous with my plans, and I’ve found myself far happier for it.

What is the biggest thing you learned about yourself?
I learned how to trust myself while traveling alone. During spring break, I traveled to Seville, Spain and spent the three-day weekend traveling the city by myself. I don’t know a lick of Spanish, so I didn’t have that language skill to fall back on for communication, but I enjoyed the freedom of traveling outside of the guided sort of tours we were given when we ventured outside our base in the Rabat medina in my program. Navigating the city, figuring out how to communicate with people who didn’t share a language with me, and traveling on my own on hours-long bus and ferry rides was not anywhere near as nerve-wracking as I expected it to be. I actually found it freeing. It was the experience of traveling solo that led me to decide that I wanted to do graduate school abroad.