The Lighthouse Announces Impressive Lineup of Speakers for Spring 2019 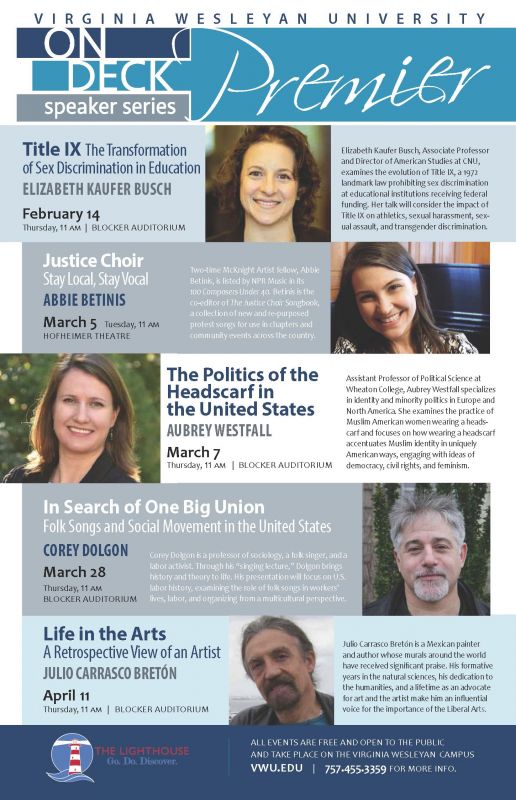 From “The Politics of the Headscarf in the United States” to “Life in the Arts,” the spring  On Deck Premier Speaker Series promises to be interesting, informative and thought-provoking. The series, sponsored by The Lighthouse: Center for Exploration and Discovery, brings an impressive lineup of five speakers to share their professional expertise and insights with the VWU campus community on a variety of topics.

Mark your calendars for these notable spring semester events.

Two-time McKnight Artist fellow, Abbie Betinis, is listed by NPR Music in its 100 Composers Under 40. Betinis is the co-editor of “The Justice Choir Songbook,” a collection of new and re-purposed protest songs for use in chapters and community events across the country.

Aubrey Westfall: The Politics of the Headscarf in the United States

Assistant Professor of Political Science at Wheaton College, Aubrey Westfall specializes in identity and minority politics in Europe and North America. She examines the practice of Muslim American women wearing a headscarf and focuses on how wearing a headscarf accentuates Muslim identity in uniquely American ways, engaging with ideas of democracy, civil rights, and feminism.

Corey Dolgon: In Search of One Big Union – Folk Songs and Social Movement in the United States

Corey Dolgon is a professor of sociology, a folk singer, and a labor activist. Through his “singing lecture,” Dolgon brings history and theory to life. His presentation will focus on U.S. labor history, examining the role of folk songs in workers’ lives, labor, and organizing from a multicultural perspective.

Julio Carrasco Breton: Life in the Arts – A Retrospective View of an Artist

Julio Carrasco Bretón is a Mexican painter and author whose murals around the world have received significant praise. His formative years in the natural sciences, his dedication to the humanities, and a lifetime as an advocate for art and the artist make him an influential voice for the importance of the Liberal Arts.

For more information about the On Deck Premier Speaker Series, visit The Lighthouse: Center for Exploration and Discovery.