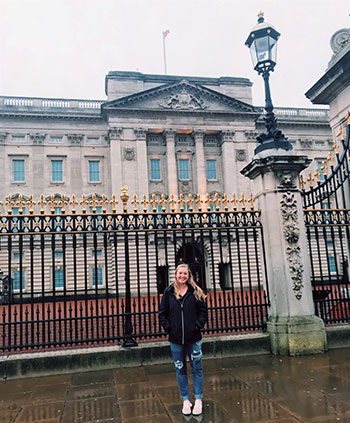 When Mary Alexis Jackson ‘21 stepped off of the plane in London to begin a semester study abroad experience in the spring of 2020, she admitted that she was anxious about this new adventure that was well outside of her comfort zone.

“I have always been a more reserved person who felt most comfortable doing things when I had a friend doing them with me,” said Jackson.” When I studied abroad, I knew absolutely no one going in. I had to get on a plane and fly to a brand new country all by myself, meet new people, and learn a brand new academic style. I was pleasantly surprised with how I handled all of this.”

As a communication major and psychology minor, Jackson found the academic structure at the University of Westminster helped her to gain skills and focus her career aspirations.

“I was presenting and doing group work in almost every single class. This helped to give me confidence in public speaking and presenting information. The group work I did also benefited me because I was working with all kinds of people and really learned what it meant to work as a team. As I plan to enter the field of recruiting, I will be working with a team of people and we will need to come together in order to succeed.”

Her education in London did not end in the classroom.

For Jackson, her most memorable moments came while experiencing the culture and customs of London.

“Each day brought something new and exciting. My friends and I went to the “Great Gatsby Immersive Play” where you are considered members of Mr. Gatsby’s party and part of the show. The characters would come up to you and have normal conversations like you were in the show. It was a very cool experience.”

“One of my favorite things I saw was Abbey Road Studios where the Beatles recorded a lot of their music. My father is a huge Beatles fan and I have grown up listening to their music so being able to go to a place where they shot their famous album cover and recorded music was very cool.”

Another big part of the culture is football, known in the United States as soccer. As a member of the soccer team at Virginia Wesleyan, Jackson knew it was important for her to continue her training and experience English football while in London.

“I got the chance to play with a semi pro English women’s football club, the London Bees. My time with the team taught me about England’s love of soccer.”

She was also able to experience one of London’s most famous customs.

“I was lucky enough to experience a traditional London high tea. The entire service, from the tea to the cakes and sandwiches, made me feel very sophisticated and fancy.”

Overall, this experience that she initially approached with some trepidation, really strengthened her self confidence and encouraged her to grow.

“The biggest thing I learned about myself was that I can really do anything if I put my mind to it. Before studying abroad, I felt as if I was limiting myself and didn’t know what I was truly capable of. I learned that I am adaptable and willing to challenge myself.”

Jackson says that learning how to navigate a big city like London, meeting so many new people, and loving her classes, led her to gain a new found independence.

“I did so many things on my own and learned to love it. I think the ability to step out of my comfort zone and really grow my confidence was one of the most important takeaways for me from studying abroad.”

She encourages other students to participate in a once in a lifetime opportunity like this.

For information on Virginia Wesleyan’s study abroad opportunities, including the Global Scholars semester abroad program, study away courses, and summer study abroad, visit The Lighthouse: Center for Exploration & Discovery.
Back To Top