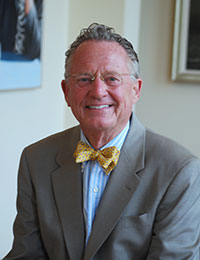 On February 1, 1982, David arrived on campus as the newly appointed Dean of Students and Instructor of History.Â  Initially, he had four departments under his tutelage.Â  During hisÂ 33 year tenure at the College, David has held the position of Special Assistant to the President, Acting Director of College Communications, and currently serves as Vice President for Student Affairs. David oversees Batten Student Center, Campus Security, Chaplain, Community Service, Counseling, Dean of Freshmen, Dean of Students, Health Services, Residence Life, and Student Activities.

In collaboration with numerous faculty, staff, and students, David was instrumental in creating the VWC Creed and establishing several College traditions such as the Spring Honors Convocation, Seafood Party in the Dell, Lake Taylor Music Festival, Mud Games, Faculty/Staff Holiday Party, Parents’ Weekend, and the “Homecoming Parade.”Â  He has worked tirelessly over the years with colleagues to enhance and refine the Student Affairs/Enrollment Division which included the College’s admission into the Old Dominion Athletic Conference (ODAC).Â  Moreover, in concert with the YMCA of Hampton Roads, David pioneered a two-day overnight program on the Eastern Shore at Camp Silver Beach for all incoming freshmen as a part of new student orientation.

In addition to David’s post graduate work at Harvard, Old Dominion, Virginia Commonwealth, and VirginiaÂ State Universities, David holds a Master of Arts in History from Old Dominion University and a Bachelor of Science in Social Science from Campbell College.Â  Prior to completing his degrees, David served in the United States Marine Corps . . . Semper Fidelis.

David is a member of the Virginia Association of Student Personnel Administrators (VASPA) and the Omicron Delta Kappa (OÎK) National Leadership Honor Society and serves on the advisory board of the Old Dominion University Darden College of Education.

For the past three decades, David’s community service and professional activities have included board membership for the Etta & Henry Stokes Day Care Center, Board of Higher Education Ministries (BHEM), Tidewater Psychiatric Hospital, and the Great Bridge United Methodist Church.Â  He was a lay member on the Committee on Ordained Ministry for the Virginia Annual Conference of the United Methodist Church, served as the Region III Review Editor for the National Association of Student Personnel Administrators (NASPA), and was a charter trustee for the OÎK Foundation.

In his role as dean, David's philosophy is to provide students with unconditional support and offer them purposeful activities for growth and development outside the classroom.

David was born in Washington DC and is married to the former Linda Gay Cook.Â  They have two grown sons, Jonathan and Paxton.Â Â Jonathan and his wife,Â Emily, have blessed David and Linda with their first grandchild,Â Caroline Elizabeth.