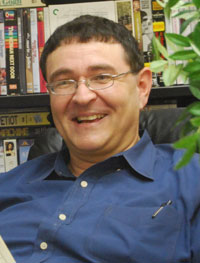 Alain Gabon is an associate professor of French at Virginian Wesleyan College. He was born in Dijon, France and received his bachelorâs degree in English and American literature and civilization from University of Dijon- Burgundy. After teaching in London, he earned a masterâs in French studies at Miami University in Oxford, Ohio and a doctorate in French studies and film at University of Iowa.

Dr. Gabon specializes in French language, history and culture. His courses, publications and presentations cover literature, religion, politics and film. He was selected to participate in a National Endowment for the Humanities summer research seminar in Paris in 2012. The five-week seminar for university professors and scholars explored four critical periods of crisis in French History and how they have shaped French identity and current debates: WWI; WWII, the Vichy Regime and the German occupation; Communist crimes; and the decolonization period and the Algerian War. Dr. Gabon also received a 2011 Virginia Wesleyan College Summer Faculty Development Grant for the research project, "Is There a French Islam?"

He has published many other scholarly articles and has travelled extensively giving presentations. During his free time, Dr. Gabon enjoys watching films and travelling back to his childhood home and other destinations. Â