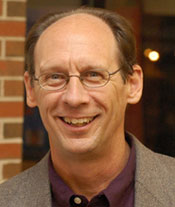 Joan P. and Macon F. Brock Jr. Director of the Center for the Study of
Religious Freedom and Professor Emeritus, Interdisciplinary Studies

Paul came to Virginia Wesleyan in May 2005. He has a wide-ranging background that includes religion, law and music. He holds a Master of Divinity (M.Div.) and Ph.D. in the study of religion from Harvard, as well as a law degree (J.D.) and a music degree (B. Mus.) from the University of Michigan. He is an ordained Unitarian Universalist minister.

Paul's professional career includes six years of law practice in New Mexico and three years of church ministry in Lexington, MA, near Boston. His academic career includes 14 years as a full-time law professor at three different law schools, as well as 9 years teaching theology and religious studies at a range of institutions, including Andover Newton Theological School, Harvard Divinity School, and Pendle Hill Quaker Study Center. He has published widely in both law and theology; his latest books are From Jamestown to Jefferson: The Evolution of Religious Freedom in Virginia (2011, co-edited), and Reclaiming Prophetic Witness: Liberal Religion in the Public Square (2012). He has also received teaching awards from two universities. Paul has also been active in various forms of community service. He went to El Salvador, Guatemala and Nicaragua several times during the war years of the 1980's, doing both educational and human rights work. He is a classical and a jazz trombonist, and has played with several symphony orchestras as well as small jazz combos.  He has also performed as an actor in several plays at Virginia Wesleyan and elswhere.