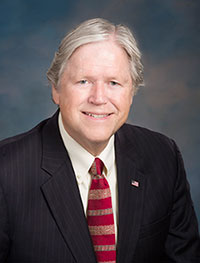 The Provost and Vice President for Academic Affairs, Dr. Timothy O’Rourke was appointed July 2007. As the academic vice president, Dr. O’Rourke is responsible for all affairs and personnel within the academic division, including the faculty. Dr. O’Rourke is a Phi Beta Kappa graduate of the University of Pittsburgh and earned a Doctor of Philosophy in Political Science from Duke University. He has over 37 years of experience in higher education as both a faculty member and administrator, and has earned the rank of Professor. Dr. O’Rourke’s more recent administrative responsibilities, which in some cases included dual administrative and faculty appointments, include: Professor and Head, Department of Political Science at Clemson University (1992–1995); Teresa M. Fischer Professor of Citizenship Education (joint appointment as Professor of Educational Leadership and of Political Science) at the University of Missouri-St. Louis (1995–2002); Dean, Fulton School of Liberal Arts, and Professor of Political Science at Salisbury University (2002–2007); and his current position as Provost and Vice President for Academic Affairs.

The Impact of Reapportionment (Transaction Books, 1980), one of CHOICE’s Outstanding Academic Books of 1980.

Dimensions of State and Urban Policy Making (Macmillan, 1975), co-editor with Richard H. Leach and others.

“The Impact of Reapportionment on Congress and State Legislatures,” pp. 195-224 in Voting Rights and Redistricting in the United States, ed. Mark Rush (Westport, CT: Greenwood Press, 1998).

"The Impact of Proposed Election Reforms on the Federal System," 3 Southern Rev. of Pub. Administration 21-31 (1979).

Selected Articles for the Center for Public Service, University of Virginia

"Voting Rights Under the Constitution: A Historical and Contemporary Profile," 61 Univ. of Virginia News Letter (July  1985).

Review of Colorblind Injustice: Minority Voting Rights and the Undoing of the Second Reconstruction, by Morgan Kousser, in 20 American Review of Politics 107-11 (Spring 1999).

Teacher’s Guide to the 2002 Elections in Missouri, prepared for Kids Voting Missouri, distributed to 10,000 teachers.

Written testimony "Regarding the Proposed Rules for 28 CFR Part 51, Procedures for the Administration of Section 5 of the Voting Rights Act," in U.S. House of Rep., Com. on the Judiciary, Subcom. on Civil and Constitutional Rights, Proposed Changes to Regulations Governing Section 5 of the Voting Rights Act, 99th Cong., 1st Sess. (1985), pp. 29-42.

Paper, "Crazy Quilts Then and Now: Shaw v. Reno and the Legacy of Baker v. Carr," presented at the Annual Meeting of the Western Political Science Association, Albuquerque, March 10-12, 1994.

Commentator, "Conference on the Twenty-fifth Anniversary of the Voting Rights Act of 1965: Law and Society," The Brookings Institution, Washington, D.C., October 19, 1990.

Presenter on “Virginia Court Days Series,” at American Bar Association Conference on “We the People: Community Forums on the Constitution,” St. Paul, May 9-11, 1986.