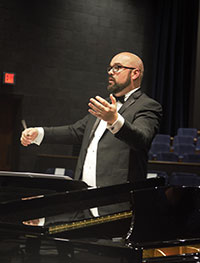 Associate Professor of Music
Chair of Fine and Performing Arts

Bryson Mortensen is Director of Choral Activities where he conducts Virginia Wesleyan Vox Vera and Camerata. Previously Bryson was Artistic Director of the Festival Choir of Madison where he premiered more than fifteen works by living composers in four years, and Director of Choral Activities at the University of Wisconsin â Rock County where he brought the UW-Rock County Jazz Singers to perform at the Wisconsin Choral Directors Association convention. Bryson has worked with living composers such as Andrew Maxfield, Joshua Harris, Timothy Takach, Abbie Betinis, Nathan Howe, Eric William Barnum, and Paul Carey. In addition, Bryson has been a guest conductor for All-District Choruses and Festivals across the country.

As director of the Vox Vera and Camerata, Bryson has led tours to Virginia, New Hampshire, Massachusetts, and Pennsylvania. He has conducted the choirs in Carnegie Hall in New York City, and conducted the premieres of Andrew Maxfield's "Armistice Sonnets," Timothy Takach's "The Longest Nights," and Joshua Harris' "There will be stars over this place forever," which was performed at the grand opening of the Susan S. Goode Fine and Performing Arts Center.