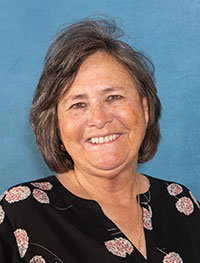 Joanne began her career at Virginia Wesleyan in 1994 as the assistant women's basketball coach, and has held an array of responsibilities ranging from head coaching stints in tennis and basketball, to serving as the senior women's administrator. In August 2007, Joanne was appointed as the interim athletics director. From 2004-05 she served as the NCAA Division III women's basketball championship tournament director, and was also named to the NCAA Division III Nominating Committee. She is a member of the Hampton Roads Sports Facility Authority, appointed by former Virginia Governor Mark Warner, and serves on the Virginia Beach Sports Grants Committee, appointed by Buddy Wheeler of the Virginia Beach Convention and Visitors Bureau. Joanne received her master's degree in human resource management in 1999 from Alabama's Troy State University and is a 1976 graduate of Old Dominion University, earning a B.S. in psychology. She is one of the six original female athletic scholarship recipients at ODU, where she played women's basketball.
Back To Top